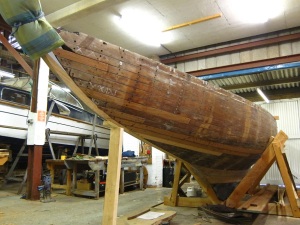 Leila – you’ve got me on my knees

It has to be said that Leila looks her age; she’s over 100 years old. The rot has set in; she’s lost her sheen and has undergone some unflattering surgery in the past. But there’s something about Leila; ‘sex in wood’, as Pete the tutor described her in our tour of the boat yard this week. After quietly thanking Pete and the patron saint of blogs for the title of this post, I took some time to stand back and properly appreciate her. When you look beyond her ageing and damaged planks, she looks fast, deft and sleek. She has an elliptical counter, lots of overhang, a bit of tumblehome, a curvaceous turn of the bilge, very little crop and a wineglass transverse section. I know this because this week we had naming of parts (or boat terminology) and there’s lots of it, so I’ve started writing a glossary to keep track of it all; but let’s concentrate on the boats for now.

Leila is a six metre class yacht designed by William Fife III, generally considered to be one of the greatest boat designers of all time, and built in 1912 at Fairlie on the Clyde; it seems incredible that she’s so old. She was found by her current owner rotting away in a timber yard. One of the most elegant features, her counter stern, had been cut away (probably because of rot); but this will be rebuilt as part of the restoration.

Leila is not the only beautiful boat at IBTC. There’s Cloud, a new build of an Albert Strange design that won a Yachting Monthly design competition in 1908. She has carvel planking in iroko wood, a spoon bow, a canoe stern and a wineglass hull section.

Then there’s Germaine, a restoration project who appears in scantlings’ masthead picture sometimes. She’s a carvel pilot cutter built by Camper & Nicholsons in 1882, she has a nice forefoot and a counter stern (in common with Leila).

That’s enough boats for now; there are plenty more in the boat shed to talk about when I get to know them a bit better (probably by taking them to bits). Now I think I’ll go and have another look at Leila.